Because it sooooo needed to be said.

UTAU is a voice-synthesis software made for the Windows Operating system. Like Vocaloid, you are in control of a vocalist to sing your songs for you. Though, UTAU doesn't have as many features as Vocaloid; UTAU does give the option to import your own voices or others voices into it, to be used for singing. This will be covered in later tutorials. UTAU is freeware, which means you don't pay for it, or the voices used. Everything is free, so if you paid for anything about UTAU or it's voices, you've been gypt!

UTAU is in no way affiliated with Vocaloid. It's engine was developed by a group of users, and not YAMAHA, or CRYPTON, the creators of Vocaloid.

The creators of UTAU have said all voices can be used in commercial work with no charge. Though, a person can sue if their voice was recorded without permission. So don't record any famous singers voices.

The Default, and only voice that comes with a fresh install of UTAU is Uta Utane/Defoko. More voices can be obtained through searches of UTAU's download page stated above, browsing Youtube, or Nico, or even just using Google. Also see the [UTAU library page].

Voicebank- Refers to the voice's used in UTAU. A voicebank is a series, or bank of files used to make a UTAU sing.

.wav- A .wav file is an audio file that UTAU uses to make a voicebank sing. All voicebank files are made in .wav format, and anything exported from UTAU is also a WAV.

.midi- A .midi file is another export-audio file that can be imported into other applications. It has a small file size, because it does not store any actual sound data - instead, it is made up of a list of instructions that tell the program how to play a piece of music. Think of a MIDI file as sheet music and the program you export it into as an instrument. A MIDI will play your voicebank in UTAU, but importing MIDIs into other applications will cause the voice to be replaced with that program's sound bank, just as you can't get a clarinet sound on a piano by playing a piece of clarinet sheet music on a piano.

.mp3- Yet another audio export file. This is a popular file format for sharing because of its small size and high compatibility with music players, but it is less flexible than MIDI and doesn't have the quality of WAV. A good idea is to export a WAV as a 'master', and then make an MP3 from that as a 'single' which you can send to others.

.rar- A .rar file is a compressed folder that can carry many files at once. To open a .rar, you will need a file extractor, like Winrar. 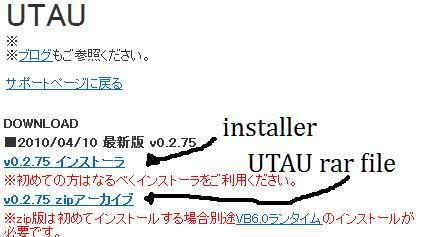 ^ You dont actually like... need the installer.
You can just download the UTAU package and it'll run fine.
[UTAU is compatible with VISTA, XP and 7, if you have AppLocale.]

When you download the package, just extract the folders in the .rar file and run the utau program in the folder.

1. Open the .rar file. Inside, there should be a folder called 'res'

2. Don't open the res folder, but rightclick on it, then select 'Extract to specified folder'

3. That box up there will pop up. Search through your folders and find the one labeled 'utau0275' IF you downloaded the latest version. Click okay and winrar will extract the res folder into yoru utau folder.

4. Open up utau and it should be in english. The res folder has scripts in it to run utau in english. Its kinda choppy, butchered english, but english nonetheless.

The patch is known to work with the latest version of UTAU (2.76) and works with SHAREWARE.

So, you want to know how to make an UTAU?
First off, you need a recording program.
Oremo and Audacity usually work best.
So, I use Audacity, so im gonna use that for this part of the tutorial.

4. So, you know how I said to download the package above? If you do that, you can create a new folder in the VOICE folder (...utau0276\voice...) inside the utau folder, and skip the step about adding the voicebank. If you have a folder under VOICE with wav files in it, UTAU automatically recognizes the folder and adds it to the list of singers. Handy-dandy.

5. Repeat for the rest of the sounds for your voicebank.

If You Used the Installer or UTAU does not Automatically Recognize

Well, we gotta do this the old fashioned way.

2. Now, we want the second tab at the top, called Bank Regist. Click on Select.

3. Browse your files and find your voicebank. Select the A sound and click open.

4. Then, in the row of 3 buttons, click Add, or the one on the far left. Then, click OK. (it says OK in untranslated version too C:)

5. To make Sure UTAU got your bank, and to Change th singer of a song, we'll go to Project (5th Tab), and then to Project Property (3rd in dropdown)

Your UTAU should be selected as the singer of the UST you currently have open. C:

For Further Explanation of Creating an UTAU, See Yesi's Tutorial here.
This tutorial explains Terms of Use, choosing the default singer, and making Oto.ini's, which... we all kinda hate. :P