First one's for Trem, second one is for Travis.

Brief Physical Description: Athletic figure. Has brown hair that she keeps up in a ponytail that reaches her shoulders. Her bangs hang down on either side of her face. Her signature outfit is a green long-sleeve t-shirt, a headset microphone, jeans, and red converse. (Creative, right? O.o)
Personality: mellow, laid back, loves singing jazz.
History/Backstory: I first posted a video of her voice in September 2009, and experimented with her randomly after that. I have recently re-recorded her entire voicebank using better equipment (a default app on my ipod touch I got as a gift to be precise, and I used the headphones as a mic). She doesn't have any kind of character background, or anything. She's just Trem, an UTAU that I'm designing for mainly english.

Character Art All I've got is what I made on an RPG face-maker that gave me free rights, since I can't draw that well. I had fun making her and Travis look glamorous! on eLouai (see bottom), but that's about it. :D
'Official' art:

Brief Physical Description: Has brown short hair with bangs (see picture), and he's of average teenage guy weight (skinny, a little muscle). Signature outfit is a green t-shirt, a headset microphone, jeans, and black converse.
Personality: More outgoing than his sister. Loves singing rock, wants to be in a rock band. Secretly enjoys programming as a hobby.
History/Backstory: No character backstory. I created his voice because I wanted to see how I sounded as a guy, lol.

Voicebank Link: English: In progress
Other: Haven't thought of making him sing in other languages, yet...
Wikia Entry Link: (in progress) 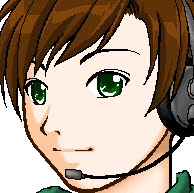 Both of them (from eLouai): 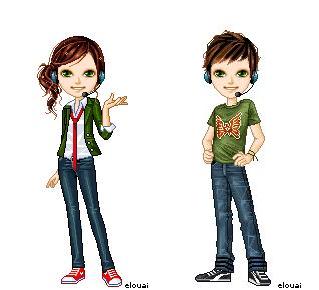 Not their exact outfits, but you get the point...

*whew* all right, there they are! In all their unfinished glory! :D Trem will probably be done soon, though

I'd ditch Travis and put all my love into Trem if I were you. She's a cutey~
Sparky

Baww Tremmm <333 She has such an adorable voice! And her English is really good too :3
Trempush

suthethird wrote:I'd ditch Travis and put all my love into Trem if I were you. She's a cutey~

aww, thanks! Travis really was kind of a side thing. I'm working on a song for Trem's new english VB, and it's definitely convincing me to just stick with her right now, lol.
Trempush

Sparky wrote:Baww Tremmm <333 She has such an adorable voice! And her English is really good too :3