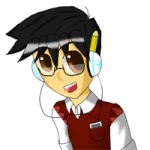 What's that program that runs programs in its native language?
Chasing Fireflies

Do you mean the Microsoft application called "AppLocale"?

(Let me explain what it is in depth for other users interested in that thing that read this post.)

AppLocale "emulates" a locale (language setting to run non-Unicode programs) even if the Windows isn't in that specific locale.

Why is it needed? Because characters in some programs, the non-Unicode ones, are just "ones and zeroes" that are going to be interpreted differently by your OS depending of the language you set your PC to read those programs.

---------------
A side note here, the language your Windows is installed and the language your locale is set are two different things. Your Windows will be always English even if you change your locale (not just emulating, a real changing).
There can be some minor changes graphically in how your file paths are wrote (for example, in English locale there is the path c:\something\program.exe while in the Japanese locale it's going to show as c:¥something¥program.exe). But they are just an aesthetic changes that normally (there are old programs that need a special locale for that), you can just ignore it as it's even the same key to write it...
---------------

Changing your locale for real can be slow as you need to restart the computer, specially slow if you have programs that need a lot of different "locales". So for these people there is AppLocale.
Keep in mind to change the locale for real is recomended if you're going to use a lot that locale and AppLocale is just a temporary solution that doesn't work 100% for everything (like in UTAU you can't use hiragana voicebanks, for example).

But AppLocale only installs normally in Windows XP (maybe older versions, too).

I really doubt it can be used with Linux and Mac. But probably those systems have other program for the emulation... that i don't know.

Once you were able to install AppLocale, to use it is not hard.

You open Applocale like a normal program and you get this greeting: 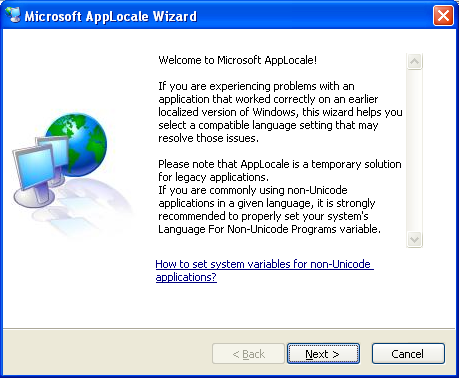 After reading, click "Next", you start on getting to the first set options: 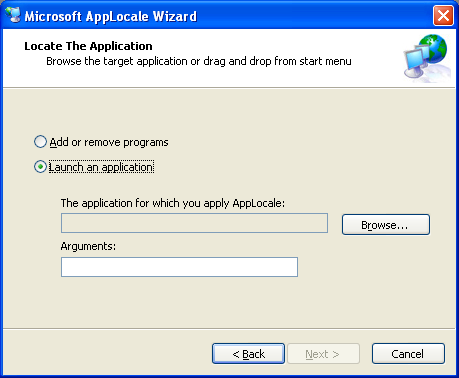 "Add and remove programs" opens the control pannel "Add or remove programs" but it will run in the locale you are going to select in the next step. I'll write about that as part of the next option explanation.

That other option is "Launch an application" that is for what it's usually used AppLocale (well, you install a program only once and you run it a lot of times, isn't it?).
You click on "Browse" and select the program you want to run with the new locale (like C:\Program Files\UTAU\utau.exe or C:\Documents and Settings\User\Desk\Touhou 09\th09.exe).
You can type in arguments for the file to run with program commands. Just ignore this if you don't know what it is because it's more for advanced use of the program.

After clicking next you have to select the language you want to be emulated for that program from a drop-down menu (both options need this step): 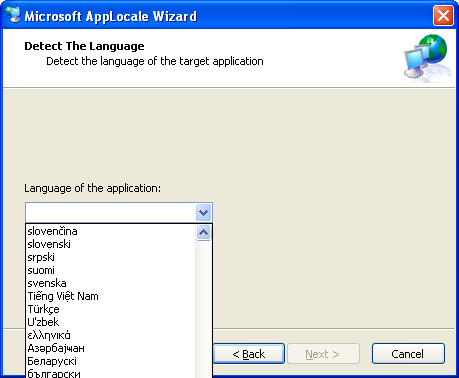 Sometimes AppLocale directly understands what language the program needs and select it for you, but normally you'll have to browse what one you're looking for.
A tip, Japanese is the bottom option (very useful, heh) and it's wrote with the kanji: 日本語.

If you wanted to "add or remove programs", that was the last step.
If you're using AppLocale to run a program you still have one last step: 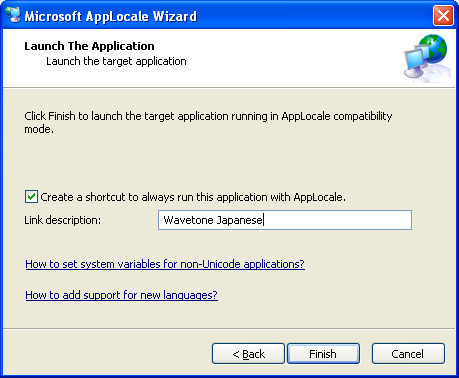 That step just ask if you want a shorcut that will do everything explained here automatically. It will be in Start->Programs->Microsoft AppLocale->"The name you choose" (the one of picture would be "Wavetone Japanese"). You can later cut and paste the link around from there.
Or you can just uncheck the box for creating the shorcut to avoid making one, of course.

Click on "Finish" and the program in the emulated locale will start to run if possible.
Like I said, Applocale is just a temporary fix that can fail and doesn't totally work always.

And ninjad by Chasing Fireflies.
I don't mind, i'm posting this anyway! XD

Fffff, no, I'm glad you posted it, that was a much better answer. ^__^ If Applocale actually /is/ the thing he's looking for owo;;
Sponsored content