My personal favorites of my artworks. 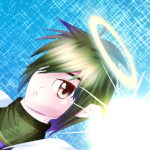 My personal favorites of my artworks.

Information about each art.

Anyways, this is the main character (You can play around with the design and such of your own main character which makes it really nice.) This is the default appearance of the character usually. (Including the hair and face)

I recommend this game, it is like a unknown awesome video game.

Inspired from the song Time for Miracles by Adam Lambert.

It is also inspired from the movie 2012 by Roland Emmerich (HoLY I LOVE THAT DIRECTOR. HE IS THE GOD OF DISASTER MOVIES.)

As you notice the megatsunami ready to take thousands of lives left behind to die, these couples hope that they can stop the tsunami and have some lives saved...I love how this came out.

My OC Kotomi Lin, a half dragon child.

I liked the photoshop effects I used in that one (Especially the crystals.)