After having an account for about 2 weeks I finally got time to do his profile :'D

Magenta turtle neck that stops above his belly button. Grey-black jacket with puffy shoulders, about halfway it stops before being connected with the rest of that jacket which has ruffles at the ends. Light Pink tie. Grey-black Pants. Magenta gloves that reaches about mid arm. Dark pink beads on both wrists. Belt that hangs to the side where he carried his microphone. Knee-length boots with ten buckles on each boot. Dark pink nail polish.

Personality: Generally He is shy around everyone, even if he gets close to someone he will continue to be shy but will open up a bit.
He does like to make friends, even if he is scared of them at first...
He's very clumsy and will even trip over thin air. Don't trust him with anything valuable and fragile... because he'll somehow end up breaking it.
He likes to keep everything clean, if something is out of place he'll put it back in order or else it will bug him to no end.
He loves to hear other people sing and learn from his mistakes.
At times he can be real playful~!

:D He loves his master no matter what~!

History/Backstory:
During the time of his creation there was an error in his programing where when he talks he stutters and when he sings he sings just fine. Though he can talk really fast without stuttering, when he talks at a normal pace is when he stutters.
Because of this condition he's very self conscious about his voice, so instead of having a headset like some of the other UTAUs he carries around a Mic instead.
Chiisaine also has a problem with his hair, he actually doesn't like his long hair which is why he keeps it held back and out of the way.
The only real reason that he has it is so that people will think he looks "cute" and "pretty" and won't concentrate on his stuttering.
The beads that he has on his wrist and what he uses to tie his hair up are very important to him.
His master gave it to him, because she always noticed Chiisaine messing with his hair yet not wanting to cut it.
So to solve the problem his master gave him those beads to tie his hair back, because his master gave him extra and he didn't want to lost them he keeps the extra beads on his wrists. Chiisaine treasures them and is almost always wearing them.

The only real time that he is confident is when he is singing, besides that he's a total mess.

Voicebank Link: mediafire.com ?3s92sjq4a4a99gc
Wikia Entry Link: None as of yet.

I love his design and he has a cute voice! :3
Noteloid

Her voice is so soft.
Keep it up!
HushedAngel 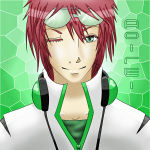 And I LOVE his eyebrows (<-- Somehow obsessed with "dot brows.")
HushedAngel

LOL I LOVE those kinds of eyebrows too~! Well any odd shaped or different kind of eyebrows.~! xD
They're cute/sexy~!
SoloAzume

<3333333
BUT DANI IS THE MANLIEST.
CHII CAN BE SECOND MANLIEST. C:
ThePianoChan

;u; he's so cute. i just died of cute over load.
VampireV

@Solo- WRONG. CHIIKO IS THE MANLIEST. SHE BEATS DANI HANDS DOWN.