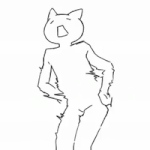 So I have to admit Ao needs some OTO tweaking. Especially with Overlap and Preutterance since I stray from touching them because when I touch them they go BOOOOOM!

Anyways...I do need some OTO tweaking and also if I need to add in other sounds and etc.

If you help me you get a free online cookie! owo
Guest

How exactly do they go boom?
Haloheroine

"Blue bar/Front cut off zone- Cuts off silence and slurs on soft consonants (s, l, f, h, n, m etc), when beta-ing otos, best to just put it at the start of the sound.
Red line/pre-utterance- Goes at the start of the vowel/end of the consonant. That's all you really need to know. Mess with it later while on a UST with the Overlap and Preutterance cleared to see what it actually does XD
Green line/Overlap- Goes halfway in between the red line and the front cut off zone.
Pink bar/how much of the sounds is stretched- Goes over the start of the vowel for a little bit.
Back cut off zone- Cuts off the natural fade off at the end (so it flows better into other vowels).

For vowels:
It’s pretty much the same, but you want vowels to flow better because they are generally used for extra vocalization and basic pitch bends.
So the front cut off goes over the start to where the orange line from the FRQ file starts to even out a bit (usually about 0.1 into when the sound starts)
The red line goes at about 50ms to 70ms (doesn't really matter but yeah), and the green line goes at the exact same number."
~From the UTAUTutorials Blog

( Since no one seems to get it half of the time, I'll make a video soon = u= )
BluePaperclip

I end up totally messing them up. v_v
Guest

As in...
It doesn't sound right?
BluePaperclip