Nai Seibetsu Design - I think I've got something? 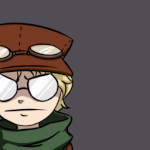 Nai Seibetsu Design - I think I've got something?

Hello again! The last thread I posted for Reim, you guys got my brain pumping -so- well. So, for my next project, I wanted some help, too.

In Reim's design, I neglected the futuristic ideas that I usually like. So I thought of implementing them in this guy. But in general, I am welcoming any and all ideas.

I have two versions of him so far. The only difference is his skintone. I can't decide! Darker or Lighter ? His name is Nai Seibetsu. He is generally androgynous [which is the pun behind his name, [性別ない - "No Gender"], though biologically, he is male. He's between 5'5"-5'9". [Probably a bit younger than the picture makes him look, too. Around 16-17 years.] Just remember the androgynous-ness. That is a key to his.."thing". Style. ... Stuff. =D;

I will say that he has plugs in the back of his neck, that can be connected to a computer of sorts, similar to "Ghost In The Shell"'s design. I really love the idea of his body parts being plugged into one if that is anything for you to go off of.

Okay so. I'm not entirely sure it would suit his personality [suggestions are more than welcome], but I have been completely obsessed with the idea of sticking him in a bodysuit. This inspiration comes from Neon Genesis Evangelion plugsuits, as well as X/1999's Satsuki Yatouji and her bodysuit that plugs her into BEAST, her supercomputer.

What do you think of this? I had stories in my mind, though I suppose they don't relate to the song, that I suppose could provide as a backstory. [Off Topic: Do background stories ever have any set..rules to them? Locations? Etc.]

His personality is..generally gentle. I'm still ironing out and fine tuning things, but at the moment I've got that he's on the 'happier' side of things. He doesn't know much about the outside world for various reasons [backstory related, pending!] and sort of lives in his own wonderland. Someone suggested making him sort have a split persona. I've considered this- as it'd be really fun for story writing- however I'm not sure if this is common or overdone. [I know in RPs it sure is.]

Re: Nai Seibetsu Design - I think I've got something?

Bumpin, because I changed like..my entire thread instead of starting a new one and cluttering up the place. =D;
Current date/time is Sun Jun 13, 2021 12:36 pm