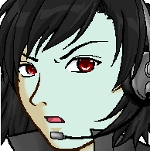 Alright guys, so I just got me a new mic and I'm psyched to record Shin's VB, so I was sitting here tweaking the levels and trying to optimize it for recording, but the levels just won't change. I keep recording test samples of my voice the same distance away from the mic, but it never gets any louder. Can you guys lend any help?

FYI, the mic I got was the Logitech desktop mic that pretty much EVERYONE owns. xD
TFOTR

Well, I had this same problem, and i'm not sure at all how to change the mic's settings, (if it has any settings at all...), but I think it's becuase the mic was not made for recording but for talking. (You use the logitech desktop skype mic, right?) I never figured out how to solve this problem so I recorded and just upped the volume when I used the recordings in UTAU. It still bugs me about the volume problem, though. Some notes I recorded, somehow turned out LOWER, than others that I said at around the same tone and volume, no matter how many times I rerecorded. So i'm just deciding to get a proper recording mic that has settings anyway. However, I didn't think that the problem could occur from the volume/frequency that you recorded at. I think most likely it is the mic itself, though. Are you using OREMO?
KURENAI

The one with the silver square base? Yep, that's the one.

Indeed I am. And I hope it's not a mic issue, since this thing is brand-spankin' new. I WOULD switch to a mic that was made specifically for recording, but 1)I wouldn't know where to put it in my messy room when I wasn't using it, 2)No moolah to spend on expensive microphones, and 3)Uhhh...nevermind. I guess there were only 2.

But yeah, I'm having basically the same problems you are. You think regenerating the frq files would fix it? I haven't tried that yet.
TFOTR

It's possible. I saw on another thread about this problem and someone (can't remember who though.), said that they were able to fix this by just regenerating the frq files, and that it was just something that the new UTAU updates just mess up on. However Smeen tried this method and said that the volume problem still occured and that it didn't work. You can try regenerating the files becuase I found out a bit ago that having frq files that were generated a long time ago *old* can affect the quality in UTAU. I haven't tried it myself becuase I'm really impatient to wait for frq files to generate properly, not botch, so that I won't have record sounds about 20 times; but you can try it and see if some magic happens.
Sponsored content