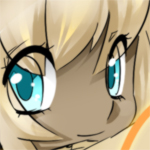 Well, I want to introduce you our group (or project, we still don't know how to call it correctly xD) named Slavik.

A few words about our...err...project?..
Slavik is a special group of utauloids released in such countries like Russia, Belorussia and the Ukraine. So actually we can't say that we are "a project", we are just a bunch of UTAU maniacs.

The name of the group\project is a word play:
- People of these three countries belong to eastern slavs.
- Keichan made a chorus of six Utauloids (that were released in Russia and the Ukraine) and Chansey called it "the slavic chorus".
- Slavik is a childish version of the name "Slava", which means "Glory" on russian language.

I decided to write about us here, cuz I can't do it on wiki, since we don't have any site or blog about Slaviks :S

And also I want to tell, lets say worldwide, about our utaus, since almost all people began to wonder when they learn that most of our utaus are realesed in russia, and girls are not so active to introduce their utaus to other overseas UTAU fans.

So, lets start!
The members of our group\project:
(currently there are 6 members, five from Russia, one from the Ukraine)
If you want to get their voicebanks, you can find the links under "Visit them" in Iiki's blog http://www.iikikoe.blogspot.com/
Current date/time is Sun Nov 27, 2022 1:59 am