Why to record your voicebank under a blanket? Has boring Science!

Why to record your voicebank under a blanket? Has boring Science!

(Everything of this may be false! XD
So you can just ignore it.
I was just bored and sometimes I like to search random things around the internet. That's why this is in the randomspamfuntiemz.)

You are alone in your room and you try to record something with your mic and you find that the recording hasn't a perfect quality. You try again with a blanket around your head and the microphone and the recording is a lot better... why?

In agreement with this article:
"On the other hand, researchers have found that echoes in the range of 1 to 50 milliseconds are lumped together by the brain with the direct sound, so they are not actually heard as distinct echoes. Delays greater than 50 milliseconds are heard as echoes."

-Note: wikipedia here states:
"When dealing with audible frequencies, the human ear cannot distinguish an echo from the original sound if the delay is less than 1/10 of a second."
0.05 s from that obscure article or 0.1 s from wikipedia... I've choosen the smaller because I have faith you've got super humans hearing.)


That is, if your voice does an echo of under 50 ms your brain is going to ignore that sound and put it together with your normal voice. (Possible exception:
human echolocation)

Let's going to calculate how long takes that hypothetical echo.
Let's say the situation is like this: 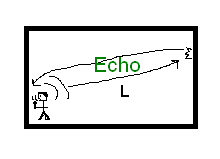 Where "L" is the distance to the other wall of your room.

Now, you know: velocity = space / time
As we want time we work out the value of time:
time = space / velocity

space is 2·L because the sound goes to and has to come back from that wall.
velocity is speed of sound.

That is lower than the 50 ms so that echo is ignored by our brain.

But, why we hear echo with an empty room a lot smaller than that? That's because the sound can bounce a lot more in an empty room: 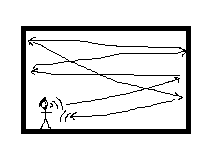 (Note: only between two walls in the picture. There are more possible bounces and so more distance between the four walls).
When the room is full of forniture the secondary bounces are going to die faster without coming back. Actually the recording rooms have special walls to absorb even the 1st bounce so you don't actually need that blanket... but I doubt we can record our "poor" voicebank in an isolation booth like Momo Momone's voicer did (I read that somewhere, not sure if it's true).

So, as
time = space / velocity
but now space is something like 6·L (only 3 bounces) and that's 24 meters for our 4 meters room, higher than the 17.15m and we get a time over that 50 ms so our brain distinguishes the echo.


So, ok, there is an echo in our room that humans can't hear. But why our computer records it?
If we follow the Nyquist–Shannon sampling theorem a good sampling rate of our recordings is going to be 44.1 kHz (the common one for UTAU). That's 44100 Hz or 44100 samples of sound in one second. If there are 44100 samples in a second that means between each sample there is 1/44100 seconds, that is around 0.00002 seconds between each sample or around 0.02 milliseconds. That's a lot smaller than those 50 ms, the extra noise from the echo is going to be recorded.

If you want that echo down, a blanket works because echo is more possible with a hard and smooth surface (like that wall or even that wood wardrobe).

Using wall carpets is another way of reducing the echo outside isolation booths because the carpet, the same way the blanket does, is going to stop the bouncing of the sound.
Darkkira1332

Re: Why to record your voicebank under a blanket? Has boring Science!