...or something along those lines. I don't even know if this post is in the right place. It's a project though, so... whatever. xD

Anyway. I'd love to make a visual novel sometime, and I wanted to try making an UTAU one, because it seems interesting. It might just be something about the UTAU community if, say, they all lived in some virtual subspace and something crazy happened. Like someone's (or more than just one UTAU's) voicebank file being deleted by a virus or something catastrophic like that.

While I'd love to go ahead and make this right now, I need characters. And at this point, I only have my own + my friend's UTAU. So I'd like to know if anyone wants their UTAU in this? The engine I'm using to make it is really simple (Ren'Py for the win : D), you don't really have to do anything. Just leave a comment saying who your UTAU is, a ref, and maybe a little bit about their personality. It'd also be helpful whether you want to be one of the UTAUs trying to solve the problem, an UTAU with a missing VB, or a bad guy. (and if you don't say I'll choose for you >: D)

I still have yet to decide who the main character might be. It might just be a random UTAU user trying to fix it himself.
moeloid

I'd love to have my UTAU Phoenix in this~!

**that blue thing under his vest isn't there anymore.

I'll let you determine what he should be^^
kaita-kun

Awesome! He'll be in it for sure. c:
Yanyu

THIS WAS MY IDEA. ARE YOU FEEDING OFF MY BRAIN? (I was gonna make one in Flash)

Hurhur. Just don't make it a harem visual novel. All the visual novels nowadays are harem.

Go use Hana if you want, anything important about her is on her UTAU wiki profile [url="http://utau.wikia.com/wiki/Hana_Kyou"]here[/url].

I'm prolly still going to do my visual novel...it's prolly gonna be harem though. And slice-of-life.
Kolya-kun

aah i've been wanting to do a visual novel for forever, just never got around to it =v=

but you can use Jessi~

Name: Jessi Maki
Age: generally portrayed as a tween (pre-teen), but you can make her whatever age you'd like~
Personality: yangire

Don't worry about Harem-ness. It won't be happening... The genders are pretty balanced so far. xD

This sounds cool >3< I love visual novels ;3; I want to make one with Ren'py too, but I still have huge plot holes so I can't start duh >.<;

I'd love to be part in this, but my UTAU is still WIP ;3;
kaita-kun

@Catgirl- that's alright! If your UTAU has a design they could still be in it with a hacked/deleted VB or something. : D
smeen

I WANNA HELP WITH THE STORY!
Catgirl

kaita-kun wrote:@Catgirl- that's alright! If your UTAU has a design they could still be in it with a hacked/deleted VB or something. : D

fffff that'd be awesome. I have one but I'm undecided about the color scheme. I was about to finish the different versions of the sketches and post a thread with them for advice.
Guest

Catgirl: I recognize Taiga from the Fate/stay night visual novel in your icon ^^

Oh yeah...Hana would be one of the cooperating (or preferably, just the bystander who eats white rice in the background)...
Catgirl

Aster Selene wrote:Catgirl: I recognize Taiga from the Fate/stay night visual novel in your icon ^^

I confess, I'm a TYPE-MOON-aholic. *A*
Guest

Are you going to use Ren'Py?
kaita-kun

@Catgirl- I'll check out your color schemes and such. I can always change drawings too. I've got plenty of time xD

@Aster- Hana could totally be a calmer cooperating person, that works fine. And yeah, I'm using Ren'Py. I've had it lying around for about a year and I've finally thought of something to do with it. xD
Chasing Fireflies

Ooh! I was actually just thinking about something like this (and apparently so was everyone else, good timing!).

Do you need any help with music or writing or anything? Basically the only reason I wanted to make a visual novel in the first place was so I could write the background music. XD;;

Also, you can use Kazuko if you'd like~
kaita-kun

I think I've got a basic plot outlined, but... background music would be good. Because although it's a visual novel, I wanted to incorporate a bit of "sound novel" (like Umineko no Naku Koro Ni) into it, because, well, it's UTAU. xD I'm not the greatest at making stuff though so if you want to make some music, go ahead! Pretty much everything works, haha.
LupinAKAFlashTH2

Oh, I like this idea! ^^
You can use Kenji Baionoto, my UTAU, if you like! (Though that art isn't really mine |D )
kaita-kun

@Lupin- that's ok. I just want to know what everyone looks like so I can draw out all the pictures. c:
LupinAKAFlashTH2

kaita-kun wrote:@Lupin- that's ok. I just want to know what everyone looks like so I can draw out all the pictures. c:

Would you like a bit of a personality?
He's kind, sometimes over-chivalrous, and playful. He also likes keychains. :3

And did you draw your avatar? Your art style is awesome~
Is it gonna be like Umineko where there's lots of story arcs?
StateOfDep

You can use Shizu, if you want~
Catgirl

kaita-kun wrote:
@Catgirl- I'll check out your color schemes and such. I can always change drawings too. I've got plenty of time xD

Ok ^^ I posted a thread about it
kaita-kun

@Lupin- Thanks! I did draw it. c: I might or might not make several story arcs... but if I do it'll probably only be two or three. I guess it just depends how everything plays out.

If you could, could you use Fuko Zonbi? Here's her wikia page.
http://utau.wikia.com/wiki/Zonbi_Fuko
Here's her art. ^^ 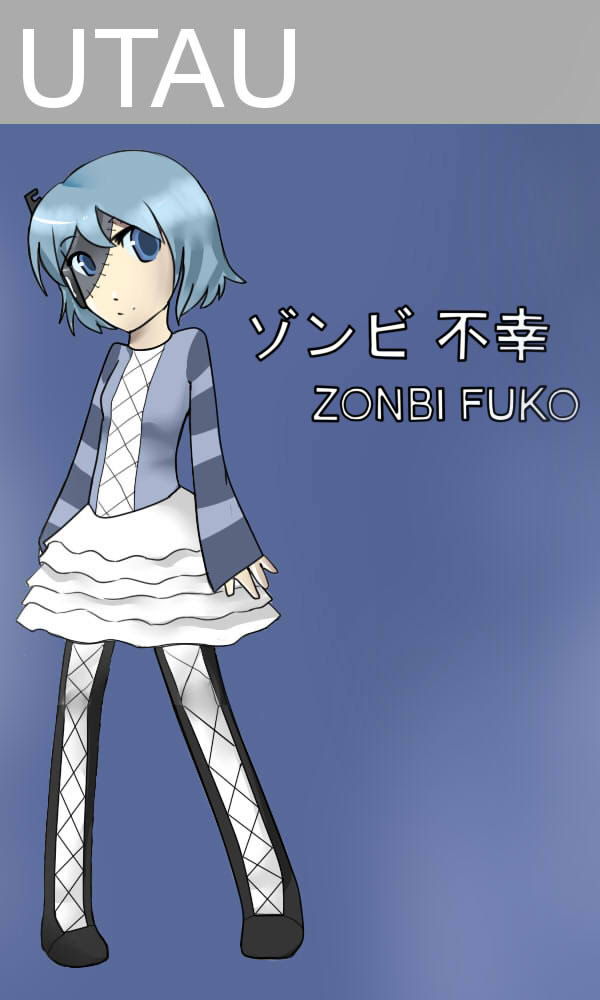 She's timid, kind of pessimistic and a yangire. However, if you are kind to her, she will look up to you. She is a zombie. ^^ She acts cute a lot.
kaita-kun