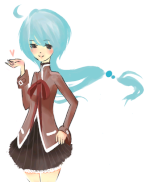 Hello,hello ~
Nice to meet you!
I don't really have a nickname or anything,so just call me Amy or Kiyo or..whatever floats your boat. Doesn't matter.

The UTAU I'm working on is named Kiyone Yasu. Kiyone meaning pure sound,Yasu meaning peaceful. Not the most original name,but I'm pretty attached to it.

She's over a year old and was created in either June or July of 2009.She's unknown for the most part.
I guess you could say I'm a rather old user of UTAU. I never got seriously involved until this year though. xDD;

I was working on Kiyone's VCV bank during June,however,the laptop she was on got physically destroyed - not a very pretty sight.I got to work on her during August - so two months of summer was down the drain. OTL

You may know me from those sites - or not,hahaha ~

Hopefully I can get along with you all and maybe make some new friends. <3

Nice to meet you, and welcome amongst us ! ^^