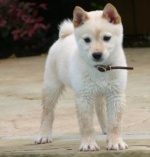 Brief Physical Description: Has ginger hair [little darker than most though], black, cheap-looking headphones. Hair is semi-medium-length, and he has pale skin with freckles. Left eye is red, right is blue.
Ears always hidden under earpieces. Microphone piece on the same side as his blue eye. Wears a plain grey t-shirt, dark blue jeans and boring looking blue shoes. Inscribed on his left arm is the code "061293", which serves both as his identification number and also is the date of his [and my] birthday.
Personality: Friendly, usually cheerful, can be a little creepy at times. Touch his chocolate and you better hope you have life insurance.
History/Backstory: Born in the United Kingdom, Zando has spent much of his life traveling between Japan and Europe, which has allowed him to be bilingual. He has no noticeable accent, regardless of the language he speaks, which is unusual. He had an dream to become famous in singing, so became an UTAU in hopes to achieve said dream. But perhaps there's more to this kid than meets the eye...

Wikia Entry Link: None yet. [darn site is too confusing...]

Character Art [please see videos in my Youtube channel for art as well]
Current date/time is Sun May 31, 2020 5:59 am