You are not connected. Please login or register
+3
irei1as
Nanashi_Zokune
Haloheroine
7 posters

I'm... Highly critical.
It's fine when it's me, or someone wants something to be edited or they want C&C...

But oh my freaking god I am breaking my (already fragile) girlfriend by making her record Jarred 3+ times before he's even uploaded once. XD
...If she ever reads this she will beat me up for saying that...

So, this time, I want your opinions... To see if he's decent enough to record some other things (Like appends or some VCVs or extra sounds), instead of re-recording his base bank another fifty times XDDD

In my opinion... I hate his accent. I really want him to have a less... Talking-basic-formal-Japanese accent. It's kinda similar to the one I use for Hayao, too.

I kinda have really clear voices that talk to me (shutup) for Hayao AND Jarred, since they were OCs first... So I'm a little worried they'll be affecting my judgment on how good the voice is as a whole... (This is why people say to make the character AFTER you have the voice)

He needs to be clearer than Hayao, and although TECHNICALLY he has a deeper voice, he requires less g+ XD Partly because my girlfriends tone is a bit deeper than mine, partly because I imagine when Jarred sings, he'd probably have a different tone. *knows her characters too well*

i liked it he sounds smooth and deep. sounds like if he were to sing a slow song he could sound very seductive. i also like that song you used it's so catchy *listens to it again*
Haloheroine

; A; O-oh. Thank you!
And yeah, Torinoko City is a great song XD
. o. Forgot to mention, I DID use fresamp with him... But it doesn't make too much of a difference ^^'
irei1as

Ugh, to give an opinion of a full voicebank with a singing part of less than a minute (singing starts at 0:23 and ends at 1:22) is hard.

I think he sounds quite nice.
He sounds relaxing on the feeling side and very clear on the technical aspect.
He really seems to fit for (kinda) slow songs. But I would like to hear him with an even faster song than this one to give a more general opinion.

If his pronunciation is off I can't help you there with an opinion because I don't know the language enough, sorry.

Hmm, if I were to make a negative critic I think it would be that he sound like if you were using the (kinda new) fresamp011. Not a bad thing... if you're actually using it.
I don't know what I want to mean, just ignore me!

Agh, this is why I don't give critics, bah. I'm too positive and I suck giving explanations on what I don't like that much. This can't be called a helping critique, sorry.
Haloheroine

Dx Sorry. I'm probably going to post more later, I just don't have anything else recent.

Hm... I was hoping to get kind of a more... well, yeah, "relaxing" and "seductive" are good enough descriptions for now. OTL Not a BAD thing, suppose.

Everyone saying slow songs is just... a bit "GODDAMMIT" to me XD All my UTAUloids turn out calmiiiing. Need to hurry up and record their ROCKappends.

And you don't suck at crits, that's perfectly fine XD

*goes to find a fast song to make him sing*
Haloheroine

...Didn't end up finding a suitable fast song, but I did make him sing something else (Without fresamp).

Voice quality sounds really good, but uhm, he sounds just like Hayao to me. Like, I wouldn't be able to tell them apart if used together. Also he doesn't really sound deep and male enough. But those are things you can't really fix, so feel free to disregard that ^^'

The quality sounds really good though. I can understand what he's saying and he's on time and stuff.. So yeah, I don't think there's a need to rerecord the same thing again. I think he'd sound nice with VCVs, so maybe record those?
irei1as

(I was the one who asked for another sample so I guess I should comment on this one, too.)

I don't agree on Jared not sounding male enough. I think the tunning is right there.
Ok, it could seem like an affeminate male -it's voiced by a girl after all-, maybe.
The song isn't help at all (I laughed at the "uh!" of 0:16. Good job with this song) as in the first sample the male voice is more noticeable. I guess "Luka Luka Fire endless nigh" would make Big Al sound femaleish (*checks youtube* -geez- no one did it).

And I have to confirm he sounds calmy but in this song in a rythmic way. I guess he can be calmy but still energic (but something was not working in the "fire!" of 0:53).

I don't really think he sounds like Hayao, really. In the ggrks video they sounded well as couple. Hmm, no idea if that changed, should I compare them together?

As overall opinion I think he sounds well.
I really doubt another recording is needed!
Yume Barauta

Is this a different VA than the Jarred in GGRKS? o3o;;
Because that Jarred sounded a bit better, IMO...

This Jarred sounds like slightly manry-er Hayao to me... I really don't know what I need to crit on except I'm telling you now I like Hayao better without the flags and Jarred will *probably* be the same. ((Upload sample without flags plz? ;u; ))
Haloheroine

regbrtkgrtkhjk I hate you all.
NOT the things I want to clarify when I get home OTLOTL

He is being re-recorded now, since Mienai said he just sounds like Hayao... And like a girl. =___='' *kinda annoyed at that* Looks like, as a side note of that, Hayao will be rerecorded as well...
He does have a different accent, though |:

And yeah, some of the "female"ness comes from the song, as much as I tried to edit the UST to be more like a male singer XD

I think the "FIRE" was just... A weird part of the UST.
And the Kimi was an enveloping problem I didn't fix, not him.

Also, this is the SAME voice bank as in GGRKS. Not just the same VA, but the same VOICE BANK. OTL He just manages to sound COMPLETELY different every time I use him.

@Yume Barauta
I'm warning you now, I ABHOR HAYAOI. Partly because EVERYONE likes him better than they like Hayao. It just kinda makes me upset >_>'' I try my best to sound like a male and then people like the low quality fail pronunciation Shota version more than the normal pronunciation pitched version.

Ahh, I'm sorry. I didn't mean to be annoying, but it was just the first thing I noticed >.< I didn't think it was that much of a problem, since you can't really help the voice sounding a little feminine if the VA is female, and the bank was clear and nice sounding and very good quality.. If he just sounded less like Hayao it'd be fine. Also, I didn't mean to make it seem like Hayao needed to be rerecorded, after all that work you put into his voicebanks D: I don't think it's that much of an issue, really.
BlackStatic 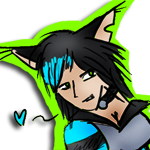 I kinda have to agree, he does sound similar to Hayao. But there is a different between the two, if that's the response you were after. Hayao's a little more, err... "crisper and louder"? Jarred's got this kinda-but-not soft thing going on...something like that. Rock just doesn't seem to suit jarred's voice as well as Hayao's atm

xMienaiTsubasa wrote:Ahh, I'm sorry. I didn't mean to be annoying, but it was just the first thing I noticed >.< I didn't think it was that much of a problem, since you can't really help the voice sounding a little feminine if the VA is female, and the bank was clear and nice sounding and very good quality.. If he just sounded less like Hayao it'd be fine. Also, I didn't mean to make it seem like Hayao needed to be rerecorded, after all that work you put into his voicebanks D: I don't think it's that much of an issue, really.

fgjshdjghgdfg Well, really, I was gonna re-record Hayao anyway OTL The Hayao thing kinda feels like I was just being mean. *doesn't remember clearly what she felt when she typed that*

I was having a HORRIBLE week (not an excuse, I know), and I really apologize for sounding annoyed. That... tends to happen after I've been having bad days OTL jefgjerkg Habit of phrasing at least ONE post like I'm pissed off.

But Jarred's being re-recorded with a nicer accent to see if he sounds any better. Then you guys have to deal, since I'm not getting ANOTHER VA.
Haloheroine

So. I decided to use the more variables available in VCVs to my advantage...
Though, he still sounds a bit womanly... He's a housewife, I'll let it go for now XD (otomen FTW)

yay! i dunno what it is about that song but i can't ever stop listening to it cause it's so catchy =3= but yay more progress on jarred! he sounds really good in that song *thumbs up*
Haloheroine

I know, right? D: I've had it stuck in my head for weeks.

I absolutely love it. AB-SO-LUTE-LY LOVE IT!