WELCOME TO WONDERLAND...
WHERE DREAMS BECOME A NIGHTMARE

This role play is inspired by the song Hitobashira Alice sung by Meiko, Kaito, Hatsune Miku and Kagamine Len and Rin.

"Once upon a time, there was a dream.
No one knew who had dreamt the dream but such a tiny dream it was.
The tiny dream began to think; 'I don't want to disappear! How can I make people dream of me?'
The tiny dream thought and thought until finally, it came up with an idea.
'I will let the humans stray into me and then, I will let them create the world.'"
PLOT:
One by one, the original four Alices travel into Wonderland, in hopes of finding their dreams.
What they do not know is that Wonderland changes to whatever their heart's desire but in a twisted manner.

The First Alice was locked in the woods, leaving her bloody sword behind. The Second Alice was shot in the head by a mad man and stained the roses a bright red. The Third Alice become Wonderland's most beloved queen but ruled it in a lost and undistorted dream. The Fourth Alice, which consisted of Twins, almost came close to discovering what it truly meant to be Alice, however, they will never wake from their dream. The ghosts of the First, Second and Fourth Alices are said to still wander in Wonderland. The Third Alice eventually died of old age.

The Dream who created this world was not satisfied and therefore, went looking for new sacrifices to pray on. Four new Alices have arrived but can they survive The Dream and figure out out what it truly means to being "Alice in Wonderland"?

NOTE: The Fourth Alice consists of siblings/twins which means there are actually two Fourth Alices. This Alice can either be two males, two females or one male and one female. They can also be played by two different people and not necessarily be twins but if they are not twins they MUST be siblings. 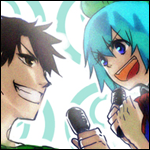 Oh! Is there any way I could reserve Dream? I have another UTAU, but I just need to scan in his picture. XD;;
xLei

Yes you may reserve~~~~
Carnivoro

Ooh, I'd love to reserve the female Fourth Alice part! I love that part~ <3 May I reserve the spot for my character Zaihone Yoku?
어리싸 라커씨(EorissaRakeo-ssi)

Carnivoro wrote:Ooh, I'd love to reserve the female Fourth Alice part! I love that part~ <3 May I reserve the spot for my character Zaihone Yoku?