Here I go again with the english works-in-progress, lol.

So I was fiddling with some loops that I found on a free loops website, and...somehow it turned into a song about an android.

Because no one's written a song for Vocaloid/UTAU about an android before, right?

But when she actually comes into contact with a human for the first time, she witnesses his emotion, and later she starts to feel it herself. She calls it as a 'Human Sound', because that's the only way the engineers that made her could get her to remotely understand the phenomenon of a feeling.

The song doesn't really have much of a plot, other than that.

I was told I'm incapable
Of expressing emotion
conscious thought was beyond my grasp
I thought that this was true.

Then I met a human being,
Someone I wasn't meant to see,
he smiled and spoke kind words
and for the first time I got to see...

(bridge)
In my first few hours of running,
I was told of a strange force,
that came from deep within the living,
they described it as a 'human sound'...

(chorus)
and I heard it for the first time,
from a stranger,
I never ever will forget the warmth,
as it echoed through my sensors,
and reached inside,
to a place that I never knew,
a Human Sound

He told me of a world outside
of the building I'd never left,
'take my hand,' he said, and we ran
without ever looking back...

(chorus)
and I heard for the second time,
from withtin
I never ever will forget the warmth,
as it echoed through my sensors,
and came outside,
from a place that I never knew,
a human sound...

(refrain)
some say I'm better than my makers,
some say I'll never compare,
but when I hear the Human Sound,
I know that I have barely begun...

and it comes from diferent places,
every time,
and I never ever will forget the warmth,
as it echoes through my sensors,
I feel alive,
and it always seems to feel new,
this human sound...

I love the Human Sound...

Never mind the space after her first set of lyrics, that's where the next set is going to go...

So what do you guys think? Should I stop before I embarrass myself, or do I have something here?

And does anyone have ides for a PV? 'Cause at the moment I'm thinkin' that I want to collab and make a PV with this song, when it's done. That's a ways off, but yeah...

Any feedback would be welcome.

That sounds great! I think you should continue with it^^ It has such a catchy beat~
numbarr3 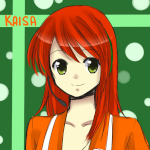 i love the lyrics and beat! ^^
Trempush

moeloid wrote:That sounds great! I think you should continue with it^^ It has such a catchy beat~

Thank you! I was listening to it for so long, I didn't know what to think of it anymore, lol.

*Runs off to add more*
Trempush

i love the lyrics and beat! ^^

OAO I like this~ very much. Looking forward to the finished version! >w<
산쇼씨 (Sansyo-ssi)

Lol, I like the beat, and I can see where you're going with the lyrics. *v*
...However I think the third and fourth lines kind of contradict, ahaha.
Trempush

산쇼씨 (Sansyo-ssi) wrote:Lol, I like the beat, and I can see where you're going with the lyrics. *v*
...However I think the third and fourth lines kind of contradict, ahaha.

ooh, hadn't thought of that--thanks for pointing that out!

I'll have to go fix this now, haha.

MichiSuzune wrote:OAO I like this~ very much. Looking forward to the finished version! >w<

*works even faster on her own songs*
Trempush